Tyler and Kyle Malinky of Brunswick, Ohio based Lowbrow Customs fame are celebrating their 15th anniversary, and to do so they have reached right back in time to reproduce one of the kind of parts and accessories that has been making the Lowbrow name for the past 15 years -  the original Wassell 'Banana' gas tank - with a few updates and selected options.

The words 'iconic' and 'legendary' are often overused, but in the case of the contribution that WE Wassell made to the British motorcycle industry of the 1950s and '60s, the accolades are fully justified.
Originally made in England as a custom gas tank for Triumphs, BSAs and other British motorcycles, by the late '60s it was turning up as a gas tank on Harley choppers (American and Swedish designs), and in the '70s became a staple of Japanese motorcycle customizing and had a particular influence on the designers at Yamaha. 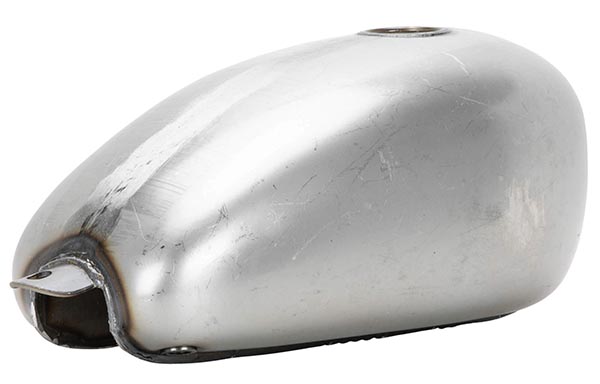 The originals are much sought after, despite being rare, expensive, rusty, and made from quite low quality thin gauge steel. Lowbrow decided to reproduce the 'Banana', widening the tunnel so it will fit many more types of motorcycle frames.
The filler neck was also changed to accept the common, thread-in, Harley-style gas cap. In addition to the original deep tunnel version, a mid-tunnel tank is also available. A third option is the aptly named 'Super Banana' - the same sleek side profile, but an inch and a half wider for added fuel capacity.
For those with an interest in the pedigree of businesses such as Wassell, and the parts it produced, there is an excellent history of Wassell at the URL below. Their beautifully formed alloy tanks and fenders had for years been the chosen item for a generation of home-built special and kit bike builders the world over, and there wasn't a small production British trials or motocross machine that didn't possess some form of Wassell componentry.
In fact, Wassell entered the kit bike market in the 1970s, with Trial and scrambler frame kits for the popular BSA Bantam 125/175 two-stroke engine and a Sachs engined 125. Their success with them led to the production of complete motocross, enduro and trials bikes, and that in turn eventually led to legendary racer John Penton selling them in the United States as the Penton Mudlark - via Mitsubishi renamed as the Tyran Antelope.
Meanwhile, back to the 21st century and to Brunswick, Ohio - if you are looking for an old style gas tank that is the 'real deal' in terms of authenticity and pedigree, then get yourself one of Tyler and Kyle's 'Bananas' before they've sold out!